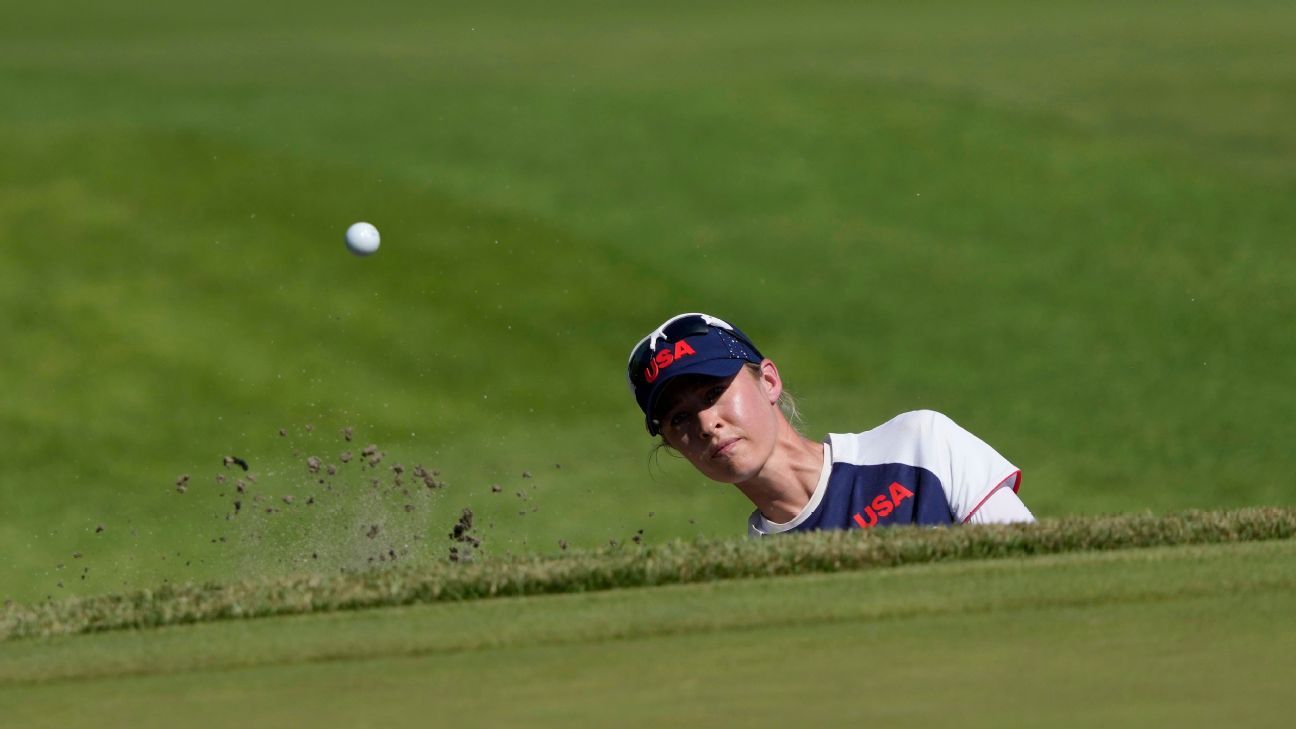 KAWAGOE, Japan — Already with her first major title and the No. 1 ranking, Nelly Korda took a big step toward a gold medal Thursday with a 9-under 62 that tied an Olympic record and gave her a four-shot lead.

Still to be determined was how much golf was left to be played in the women’s competition.

Korda looked dominant as ever, and the 23-year-old American made it look easy, at least until she reached the final hole at Kasumigaseki Country Club.

Her tee shot bounded through the sun-baked fairway into the rough, with a thick limb from a pine tree blocking her path to the flag. Instead of taking a risk, she pitched down the fairway, came up short into a bunker with her wedge to a front pin and wound up with double bogey.

Her 62 still tied the Olympic women’s record set by Maria Verchenova of Russia last time in the final round at Olympic Golf Course in Rio de Janeiro.

Korda, who won the Women’s PGA Championship at Atlanta Athletic Club six weeks ago, was thinking more about the size of her lead than having a chance to become only the second woman to shoot 59.

“I wasn’t thinking about it at all,” she said of a birdie for 59. “I was like, ‘Oh, cool, I have a pretty good lead going into 18.’ Unfortunate that double on 18, but that’s golf and that’s just how it goes sometimes.”

Keep up with the Summer Games in Japan on ESPN: Read more »

Everything else went just fine. She was at 13-under 129, four shots clear of the Danish duo of Nanna Koerstz Madsen and Emily Kristine Pederson, and Aditi Ashok of India, who is giving up plenty of distance and little else in her bid for a medal.

Madsen was 6 under through eight holes to set the early pace on another blistering day in which players often walked outside the ropes in the shade of trees. Her putter cooled on the back nine and she posted a 64.

Ashok, the 23-year-old who was often some 30 yards behind Madsen, finished with three birdies putt inside 10 feet over her last four holes for a 66. Ashok has only one bogey through the opening 36 holes.

Pederson had eight birdies and an eagle in her round of 63 to join the group at 9-under 133.

Korda was just hitting her stride when they finished. She holed a double-breaking 15-foot birdie putt on the fifth, drove the 245-yard sixth hole with a 3-wood, made a 25-foot eagle putt, birdied the next two and never really stopped.

It was a clinic of fairways and greens, birdie putts and no stress except for trying to keep from overheating. The leading kept growing, especially in the final hour when she made a 6-foot birdie on the par-3 16th and then hit wedge into 6 feet on the 17th.

It left her in great position for a gold medal in her first Olympics, and she is preparing for two more rounds. Except that part hasn’t been decided.

The International Golf Federation staff already has alerted players of a tropical storm developing that could force the women’s competition to be reduced to 54 holes.

The forecast looked optimistic enough that the plan was to start early on Friday, with threesomes going off both tees, and to go early Saturday, too. Officials are likely to have a better idea what to expect after the third round Friday.

“I’m going to have the mindset that it’s going to be a 72-hole golf course and whatever happens, happens,” Korda said. “But I’m not going to set my mind on that it’s just going to be less than 72. Because right now it is.”