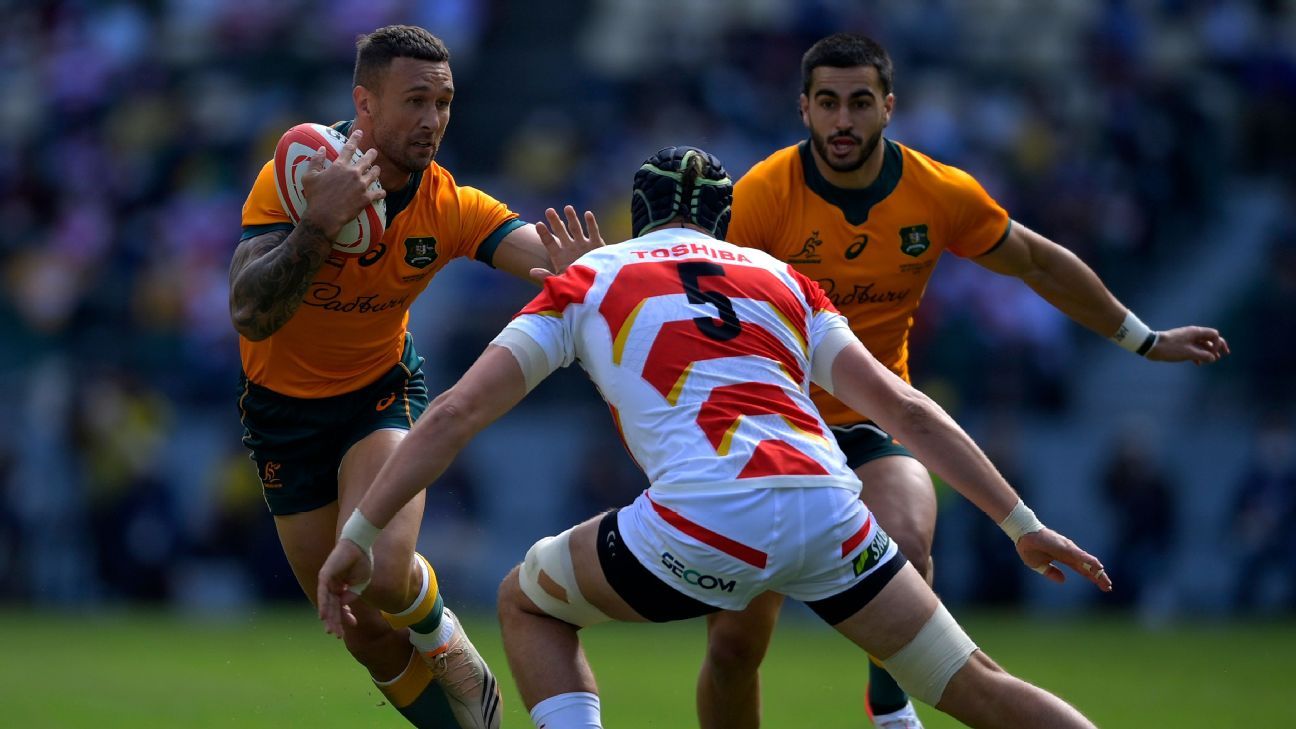 James Slipper described it as clunky; Dave Rennie said the performance was rusty and frustrating. Yet the Wallabies still made it five straight wins as they defeated Japan 32-23 to get their spring tour off on the right foot on Saturday afternoon.

But no one should be reaching for the celebratory sake, particularly when far sterner challenges lie in wait once they hit the paddock in the United Kingdom.

At this stage, according to various reports, that could be with or without Samu Kerevi lining up at No. 12. The centre has overcome his ankle injury, but discussions with his Japanese club Suntory are believed to not have progressed as smoothly as those with Quade Cooper’s Kintetsu Liners.

While Wallabies coach Dave Rennie said the Wallabies were “really happy” with Hunter Paisami, Kerevi’s absence could not have been any more keenly felt in Oita.

Australia’s four straight wins in the Rugby Championship were built on the back of the centre’s go-forward. Without him, they were forced to play a lot more rugby well short of the gainline on Saturday, and they were often sucked in by the fool’s gold on offer further out wide.

While the opposition was far less ruthless, there were a number of occasions when Australia reverted to the play that saw them swamped 3-0 by the All Blacks in the Bledisloe Cup. And anyone questioning that need look no further than Quade Cooper’s second half intercept.

The veteran playmaker, who had both good and bad moments in Oita, added his name to the list of 2021 intercept offenders that had already read; Hunter Paisami, Noah Lolesio, Matt To’omua and Matt Philip.

Having Kerevi outside him throughout the Tests against the Springboks and Pumas had allowed Cooper to underplay his hand. Without the centre on Saturday, Cooper was forced to duck, weave and pop pass his way out of trouble. And that didn’t often end well.

“We played a lot of rugby in between the 10s [10-metre lines] and certainly late in the game we got penalised a fair bit around there,” Wallabies coach Dave Rennie said when asked where the Wallabies had lost their way. “And even the intercept, we’ve got four-on-one and we’ve just got to give it to the guy next to us, but we knew that going in.

“But we’re happy to win, and we’ll be better for that game. And they’re a good side, every time we gave them a bit of a sniff they hurt us.”

When Yu Tamura kicked a penalty to reduce the gap to just four points with six minutes to play, Japan’s pursuit of an historic upset felt a lot better than just a “sniff” of victory.

Fortunately for the Wallabies, they were able to revert to what had been the shining light of their performance, the set-piece, to get over the line in Oita. And that indeed reflects the growth in this Wallabies team over the past two months.

After working a superb move from the front of the lineout to set up a try for Taniela Tupou just after halftime, the Wallabies again used their set-piece dominance to seal the win with a driving maul that resulted in a try to Brumbies hooker Connal McInerney on his Test debut.

Dan McKellar’s fingerprints were all over both tries and the Brumbies coach must be credited for helping take Rob Valentini’s game to another level, too. Already a standout performer for the Wallabies in a number of Tests this season, Valetini was again among Australia’s key contributors.

Valetini was ably supported by Rob Leota at No. 6, with the Rebels back-rower finally producing the kind of authoritative carries Rennie had brought him into the side to deliver.

The Kerevi issue aside, the Wallabies also have a problem on their hands at fullback with Reece Hodge having suffered what looked to be a serious pectoral injury. Andrew Kellaway did an admirable job filling in, while the injury also saw Jordan Petaia get valuable playing time, but there may yet be further reinforcements called in up north.

The three European based players named in the original 37-man squad, Will Skelton, Rory Arnold and Tolu Latu, will all join the squad in Edinburgh on Sunday.

Asked ahead of the tour whether the three men could feature at Murrayfield, Rennie said it was more likely they would be set for England a week later given the need to bring them up to speed on team structure and “detail”.

He gave a similar response last Thursday when asked whether Izaia Perese had been considered for the weekend’s Test with the Brave Blossoms.

But should the reported discussions with Kerevi’s club Suntory, who also have Sean McMahon on their books, not play out as desired, on the evidence of Saturday’s effort the Wallabies are going to need more go-forward through the middle of the paddock.

And that may force Rennie’s selection hand when it comes to one, or both, of Skelton and Arnold. It could also bring Perese, who shredded tackles throughout Super Rugby, into the frame.

And so the tour moves on to Brighton on England’s south-west coast, where the Wallabies will spend the week before they head onto Edinburgh.

Another win in the back pocket, their fifth in succession, Australia are now in a position they could have only dreamed of after their loss in Perth in the first week of September.

“It’s just reinforcing the type of play that we want to encourage on the field and the type of team we want to become,” Wallabies skipper Michael Hooper said of his team’s streak.

“But there’s still a lot to go and a lot to grow for us, for sure. Having the ability to change players in and out and guys still putting in really solid performances is certainly an aspect of the team that is really pleasing.

“Being able to interchange and Dave being able to pick different teams and still get a result. We’re about to enter a place far away from home, which we haven’t done for a long time, [but] we’re right at the perfect time, this group, to take on that challenge.”

The ability to rid themselves of the bad Bledisloe habits they slipped back to in Oita, and adjust to another varying style of play, will determine whether they notch a sixth straight victory in a fortnight’s time.