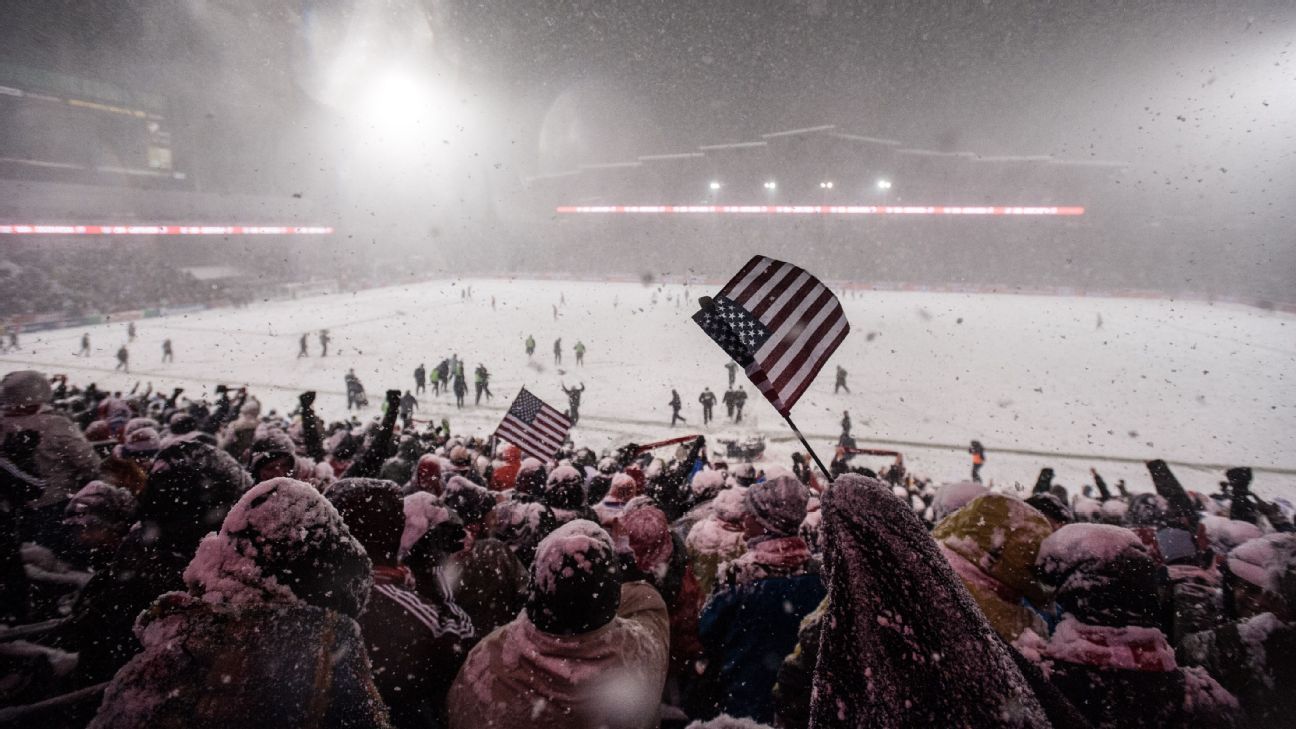 Every run-up to a World Cup qualifying window has its area of focus. Usually its centers around player availability, or the opponent. But the upcoming trio of games for the United States men’s national team against El Salvador in Columbus, Ohio, Canada in Hamilton, Ontario and Honduras in St. Paul, Minnesota has a special point of emphasis.

The weather, and just how much of an advantage it might provide for the U.S. team.

To the surprise of no one, it will be cold. It is late January (and early February), after all. According to Accuweather.com, the forecast for Thursday’s match (7 p.m. ET, watch LIVE on ESPN2) against the Cuscatlecos is expected to be in the low 20s with light winds and a chance of intermittent snow. Slightly colder but dry conditions are expected for the Canada match. The encounter with Honduras is forecast to have temperatures go down to nine degrees, have wind gusts up to 17 miles per hour with a 94 percent chance of snow, though obviously much can change between now and then.

With those conditions come questions. How will preparation be affected? Will the players be negatively impacted? How well will the respective fields — at least in those venues where the U.S. has control — hold up?

The reality is that any time it comes to selecting venues for World Cup qualifiers, there are innumerable moving parts. There’s venue availability, the state of the field, the impact of travel and yes, weather.

That travel issue is one of special importance to U.S. manager Gregg Berhalter. Berhalter is well known for wanting to keep travel time to an absolute minimum, whether it be flight times or bus rides to and from practice. And yes, Berhalter has considerable say as to where the U.S. ends up playing.

“If we were the Senate, the manager would have 51 percent of the vote,” said U.S. Soccer’s Director of Events Paul Marstellar in October.

In this case, with Canada hosting the middle match of the window, the U.S. team’s choice of venues was dependent on where that game was held. When it looked like Canada might opt for Vancouver, the U.S. Soccer Federation had San Jose, California and Portland, Oregon lined up.

But when the Canada Soccer Association opted for Tim Hortons Field — 42 miles southwest of Toronto — the calculus changed and Columbus and St. Paul were selected given their proximity to Hamilton.

Major East Coast metropolitan areas have been precluded from World Cup qualifying matches despite being closer to travel for the European-based players and lends to the notion that the U.S. venue selection process looks like a bit of overthinking. But Marstellar adds that the demographics and popularity of rival teams in those areas inhibit pro-USMNT atmosphere.

“Between [Mexico and] Guatemala, Honduras, El Salvador, those are also games that are challenging in terms of venue selection. Given the number of folks that they have throughout the country, which is why all the games against those teams end up being in, you know 20,000-seat MLS-specific venues,” Marstellar added.

And while New York/New Jersey, Philadelphia and Washington, D.C. all have newer soccer-specific stadiums, the experience of some home qualifiers from years past seems to stick in the collective memory. Honduras fans have a history of showing up in droves, with the 2001 win at RFK Stadium for the Catrachos as well as a narrow defeat in 2009 at Chicago’s Soldier Field being the most prominent.

And then there was the 2-0 loss to Costa Rica during the doomed 2018 qualifying campaign. That result at Red Bull Arena in Harrison, New Jersey, has also taken on outsized importance in the discussions about venue selection. Then-manager Bruce Arena criticized the choice, even though it was a night when the U.S. had a considerable home support in terms of fans, but the team performed so poorly it only sounded like the crowd was being shouted down by the Ticos‘ faithful.

Yet the U.S. obviously feels it isn’t in the position to be taking any chances. The limited number of seats in Columbus and St. Paul should guarantee a pro-U.S. crowd, and Berhalter has continually talked up the perceived advantage of playing in the cold. Many of the U.S. players perform for European clubs while the vast majority of Salvadoran and Honduran players play for teams in warm-weather climates.

“This is an opportunity to us for gain to gain an advantage on our opponents,” he said during a Zoom call with reporters. “They’re all coming from the equator and it’s going to be really difficult for them to deal with these conditions.”

There haven’t been all that many occasions when the U.S. could play the cold-weather card. Since 2000, only four U.S-hosted World Cup qualifiers have seen the temperature hit 40 or lower. Included in that quartet are a pair of iconic games: the 2001 encounter in Columbus with Mexico (the first installment of the Dos a Cero chronicles), and the “Snow-clasico” against Costa Rica at Dick’s Sporting Goods Park in Commerce City, Colorado, in 2013. The temperature at kickoff of both of those games was 29.

Both USMNT and World Cup veterans Jermaine Jones and Herculez Gomez took part in that match against Costa Rica, and had differing responses to playing in the cold.

“If you come out to warm up, or you walk out to check the field, it feels cold,” Jones said. “But then if you really got into just getting warm, and doing the warmup and do all that stuff, then I think it’s just getting your body up to temperature. Your body gets ready, you’re ready to play.”

Gomez felt the impact to a greater degree.

Yet both agreed that there the challenge is more mental than physical,

The USSF’s own Recognize to Recover guidelines for playing in cold weather, combined with the forecast, indicate there is a “high risk of cold-related illness”. But USSF Chief Medical Officer Dr. George Chiampas is confident that the conditions can be managed, and that things could be a lot worse. From his vantage point, dealing with cold, dry conditions with light winds is easier than coping with altitude or the twin obstacles of heat and humidity. In the upcoming matches, the players will be constantly moving, and there are ways to mitigate the cold, be it layers or Vaseline on the feet. Staying hydrated is key as well.

“These are all things we can manage,” Chiampas said of the cold.

There is an impulse to think that players are more susceptible to muscle pulls in cold weather, but Chiampas said, “I don’t think the data is there to support that. I think what we always get worried about is probably getting cleated, getting stepped on, a tackle. Those collisions in colder temperatures are probably going to be a little bit more painful.”

The biggest challenge might be keeping the players on the bench warm. While there will be layers and blankets, the key is making sure the players get a proper warmup and get their body temperature raised. Do those two things, and any concerns about muscle pulls are drastically reduced.

“We’re going to obviously have to adjust a little bit and think through our warmups,” said Chiampas. “Obviously, we’re limited with the number of people we can warm up at a time, so you may have to see them get up multiple times. Traditionally, you see one group and then a second group. So you may see a little bit more frequency there.”

Given the U.S. team’s confidence in managing the temperature, focus is shifting to field conditions. The impulse is to think that the game won’t be pretty, which would seem to play into El Salvador’s blue-collar approach.

This is where the undersoil heating systems at both Lower.com Field and Allianz Field will give the U.S. an advantage, or so the thinking goes. The idea is that so long as the field isn’t frozen, then the U.S.’s technical advantage should still be in force.

The system at Lower.com Field consists of three boilers that pump a mixture of water and glycol through 10 miles of what is called PEX piping that lies about 10 inches beneath the surface of the field. Ben Jackson, the Director of Grounds at Lower.com Field, said that while the stadium only opened last July, the undersoil heating system has been running continually since late October.

“If we didn’t have that [system] right now the field would be frozen,” said Jackson. He added, “We were able to raise the temperature up and push growth and recover and get everything back to a really good spot by the end of December. I think it’s probably going to be in the best state that it’s been throughout the year.”

One potential wrinkle is that up to five inches of snow is expected to fall in the Columbus area through Monday evening. Jackson anticipates that while much of the snow will melt off, some kind of removal — be it mechanical or manual — will be required.

“We can just take some shovels out there, just do kind of an all hands on deck and throw a bunch of people at it to shovel stuff off,” he said.

A little fun in Snowhio over the past couple days for @USMNT ❄️🇺🇸⚽️#GroundsCrew96 #USMNT #Training #WCQ #USA pic.twitter.com/1BqnypP3EW

Snow on game day — which is what is forecast for the Honduras game — would be a different story. While the heating system would help, it wouldn’t necessarily be enough to prevent snow from collecting on the playing surface.

“[Dick’s Sporting Good Park] had the same thing and look what happened in the Snow-clasico,” said Gomez about undersoil heating systems.

Adding precipitation to the equation wouldn’t be beneficial to the players in that adding damp conditions would make it more difficult for them to maintain their body temperature. If the Snow-clasico is anything to go by, a slugfest would likely ensue. Not exactly the perfect recipe for a match that the U.S. is heavily favored to win.

“It’s concentration at the utmost. It’s not easy,” said Gomez.

The current crop of U.S. players, for its part, is embracing the challenge. Defender Walker Zimmerman spoke of wanting to play in something “iconic.” Securing maximum points, and moving closer to World Cup qualification will no doubt suffice.

Captured Ukrainian medic’s bodycam footage shows first-hand horror of Mariupol
Last Ukrainian troops in Mariupol told to stop defence of city
There’s relief in Number 10 but they are not celebrating Johnson’s partygate survival just yet
Natural gas prices have already doubled this year. A hot summer could push them even higher
Why Tesla was kicked out of the S&P 500’s ESG index