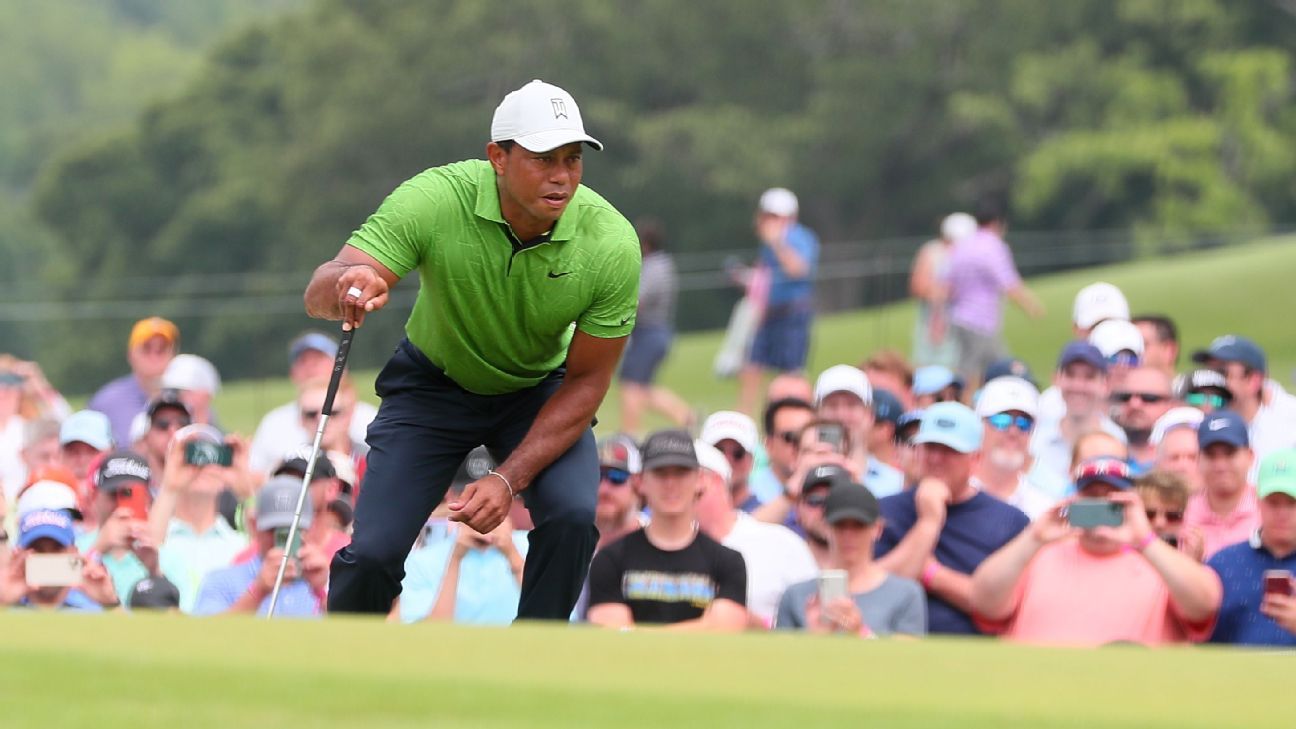 TULSA, Okla. — How do you feel, these days, when you watch Tiger Woods tee it up in a major championship?

There are no wrong answers, which is one of the reasons we’re so drawn to the drama of sports. We can all watch the same events unfold, the same athletes compete and feel something different. Woods might be our greatest example of this.

He is the most accurate Rorschach test we have.

Maybe you feel inspired, watching him trudge his way around Southern Hills, giving the game whatever his body has left. It’s easy to be in awe of the grind. There have been times during the first two rounds of the PGA Championship when Woods has looked — to put it bluntly — miserable. But after a second-round 1-under 69, he will be around for the weekend for the second straight major, a development that would have seemed impossible 18 months ago.

Maybe you see qualities in Woods you hope exist in you: strength, grit, courage and commitment. When he grimaces in discomfort after an awkward swing, or climbs out of a bunker in obvious agony, you don’t have to feel sorry for him. Instead you can admire the fight, the nobility of refusing to yield to the pain.

If you feel this way, you’re not alone. It’s exactly how Rory McIlroy felt after playing alongside Woods for two days.

“He’s incredibly resilient and mentally tough,” McIlroy said. “He’s feeling it on every swing. Looking at him [Thursday], if that had been me? I would have been considering pulling out and going home. But Tiger is different. He’s proved he’s different. It was just a monumental effort”

If you feel the way McIlroy does, you probably love it when someone suggests Woods hang up his spikes, that he walk away from golf, because you’re convinced it will serve as fuel for his inevitable comeback. To you, Woods’ personal life — and the Shakespearean drama of it — has never really mattered. You’ll love to watch him hit a golf ball, and you’ll never stop believing he is going to defy the slow march of time and conjure up the magic of his youth once more.

“It’s unbelievable to make the cut at Augusta and make the cut here,” McIlroy said. “I was joking with [Woods’ caddie] Joey [LaCava], he could have come back at Honda or Valspar, two of the flattest courses on Tour, it might have been easier for him. But he comes to two of the toughest walks we have.”

Make your picks and compete for a chance to win $5,000! Make Your Picks

Maybe, though, you feel sadness. You can’t understand why he’s still doing this. That’s OK, too. Because this is not the Tiger Woods of 2000, or 2006 or even 2019. It can be uncomfortable to watch Woods put himself through obvious pain just to find himself tied for 53rd place, especially when you realize something sobering.

When Woods’ leg buckles — which it did Friday when he flared a short iron into a bunker from the middle of the fairway on 12th hole — it’s hard not to worry. You can feel the worry in the crowd. You can read a steady stream of concern for him on Twitter. What if he’s making his injuries worse? What if he becomes a shell of what he once was? What if he is this era’s version of Willie Mays in a Mets uniform, stumbling in the outfield? What if he’s Michael Jordan, hobbling around the court with the Wizards, his right knee so sore he can’t even dunk?

Is this how some people will remember him?

You aren’t alone if watching him invokes a whiff of melancholy. Tiger Woods was never meant to look mortal. He refuses to adjust his expectations, insisting he can still win majors, so aren’t we honoring that by feeling the same?

“He’s trying to win tournaments,” Padraig Harrington said. “I don’t think he came here to make the cut. And I don’t think he’d hang around if he was only making cuts. He wants to win. He’s certainly not interested in cut lines.”

Maybe, though, what you feel is wonder. If that’s the case, there are thousands like you — millions, even — who just want to see Woods with their own eyes, maybe one last time before he exits the stage. The results aren’t important. It’s more like a pilgrimage, paying your respects to one of the greatest athletes ever.

Access 4,300-plus hours of live coverage from 35 PGA Tour tournaments each year, including four days of coverage at 28 events with four feeds each day. Plus, access replays, originals and more. Stream on ESPN+

That’s been obvious in Oklahoma this week. The gallery has been packed — not just with super fans, but families — and you can see parents gently nudging their young kids forward toward the rope line to get a better glimpse of Woods as he sizes up a shot. You can hear little snippets of conversation, the reverence in the words, as they try to explain.

Where do you start? It’s easy to forget, especially when he’s limping between shots, that winning was just part of what made so many of us fall in love with watching Woods. Even during an uneven round, he can still thread the needle between grit and magic, particularly with his irons and putter.

After Woods made a sloppy double bogey on the 11th hole, it looked like his tournament would be over before nightfall. But then something beautiful happened: He putted like the artist he was in his prime, needing only 7 putts on the last six holes. (He hasn’t 3-putted yet this week.)

On 13, he hit a gentle draw into the breeze with a wedge, landing it left of the pin and knowing it would hold against the slope.

On 16, he flushed a 4-iron from 211 yards, a majestic fade that held its own against the wind, then stopped 4 feet, 3 inches from the pin.

It felt, for a few minutes, like a time machine.

When Woods made his way to the interview room, he grinned as he recounted certain parts of his round, particularly the difficult bunker shot he hit on 15 to save par. He said his goals remained the same: He wants to shoot two good rounds over the weekend, see if it gives him a chance to win. Then he chuckled when asked if he felt better or worse than he did on Thursday. On a scale of 1 to 10, how was his pain?

These days, he feels a little of everything. It’s OK of we do too.