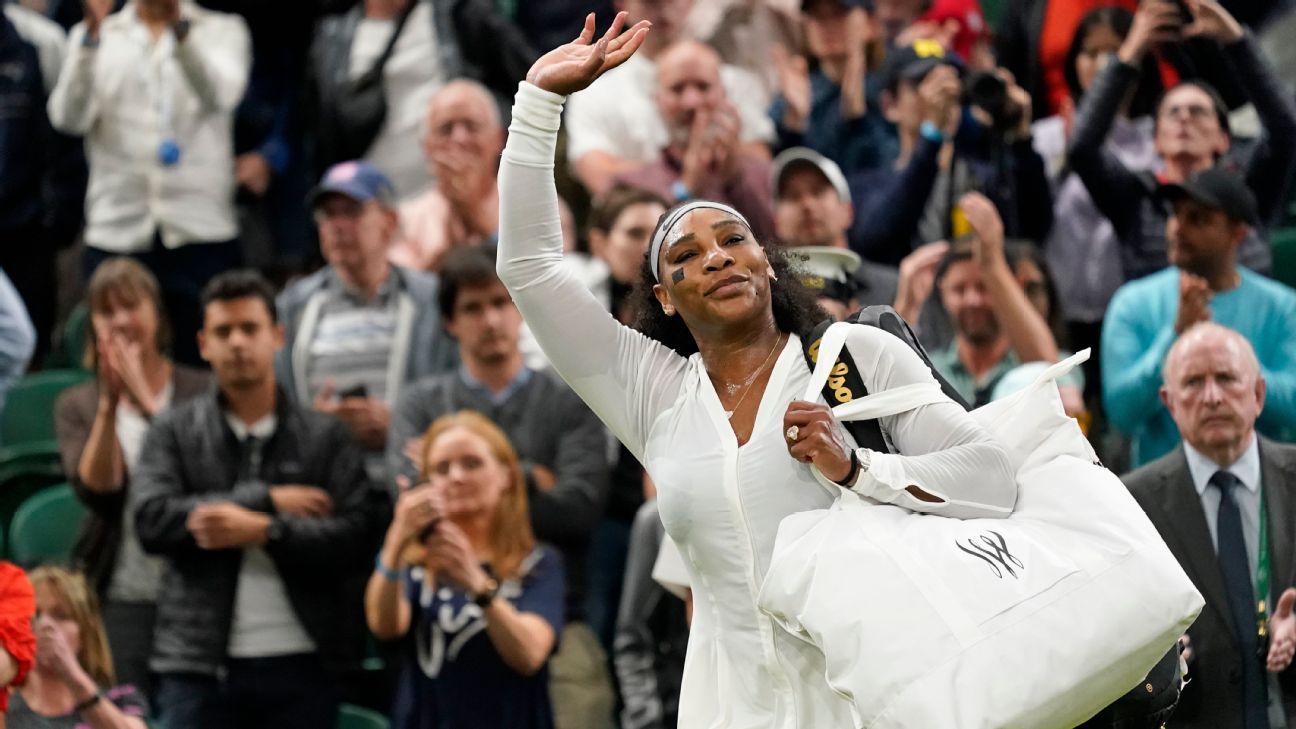 LONDON, England — Serena Williams lost in her eagerly-anticipated return on Tuesday night at Wimbledon in a hard-fought 7-5, 1-6, 7-6 (7) marathon thriller to Harmony Tan, and questions about the 23-time major champion’s future in the sport were immediate.

“That’s a question I can’t answer,” the 40-year-old said in her post-match news conference. “Like, I don’t know. I feel like, you know, I don’t know. Who knows? Who knows where I’ll pop up.”

But if that was the last time we’ll see the legendary superstar on court, at Wimbledon or elsewhere, it was certainly a match to be remembered for a long time, full of epic rallies, powerful hitting and instantly-viral celebratory reactions. Williams herself even called it “insane and intense” in a post on Instagram, and said, “my goodness I enjoyed that” despite the loss. Here are some moments from the night that won’t soon be forgotten:

Serena rallies (in more ways than one)

After losing the first two games of the match, Williams started to find her rhythm and form in the third game. During this rally at deuce, Williams flew all over the court, returning every ball Tan hit her way and winning the point with an overhead smash that brought her down to one knee. It was perhaps the first truly “Serena” moment of the match. Her close friend Caroline Wozniacki, who was commentating on the match for ESPN, called it, “very entertaining tennis.”

What a rally by Serena Williams ‼️

She came back from being down 0-2 in the first set �� pic.twitter.com/JBTiElpT0l

Cheers from across the net

During a multi-shot rally later in the first set, Williams tried yet again for the overhead smash, but this time Tan was able to return it with a flawless backhand pass down the line to even the match at 4-all. Even Williams had to clap in appreciation.

A backhand so great even Serena had to applaud �� #Wimbledon | #CentreCourt100 pic.twitter.com/816YBpzG4q

Brought to her knees

Tied at 4-all in the third set, with Williams looking to regain momentum and the lead she had earlier, the 23-time major champion hit a perfectly angled drop shot, and then dropped to her knees in celebration as she took a 40-15 lead in the game. With the roof now closed due to darkness, Centre Court roared in admiration and awe, and most in the crowd were on their feet.

Williams was within two points of victory in the third set before Tan broke her and evened the score at 5-all. She celebrated the game-clinching point with a Williams-esque, “Come on!” to the crowd.

Tan, currently ranked No. 115 in the world, was playing in her main draw debut at Wimbledon — against Williams on Centre Court, no less — and pulled off the biggest upset of her career after over three hours of grueling play. Her celebration, as well as that of her family members and friends in the stands, after the final point truly said it all as she advanced to the second round at a major for just the third time in her career. The 24-year-old later called it a “dream.”

Harmony Tan advances to the second round at #Wimbledon after defeating Serena Williams in a three-set thriller‼️ pic.twitter.com/tb9CB96k4T

The crowd on its feet

Both players were given a standing ovation at the end of the match. It seemed particularly poignant for Williams, who waved and twirled as she walked towards the exit as the crowd continued to cheer. It wasn’t nearly as emotional as her departure at the 2021 Australian Open, but a fitting farewell — whether until next year or forever — for the seven-time Wimbledon champion.

Serena Williams received a standing ovation from the #Wimbledon crowd as she left the court �� pic.twitter.com/h75gwxWEPv