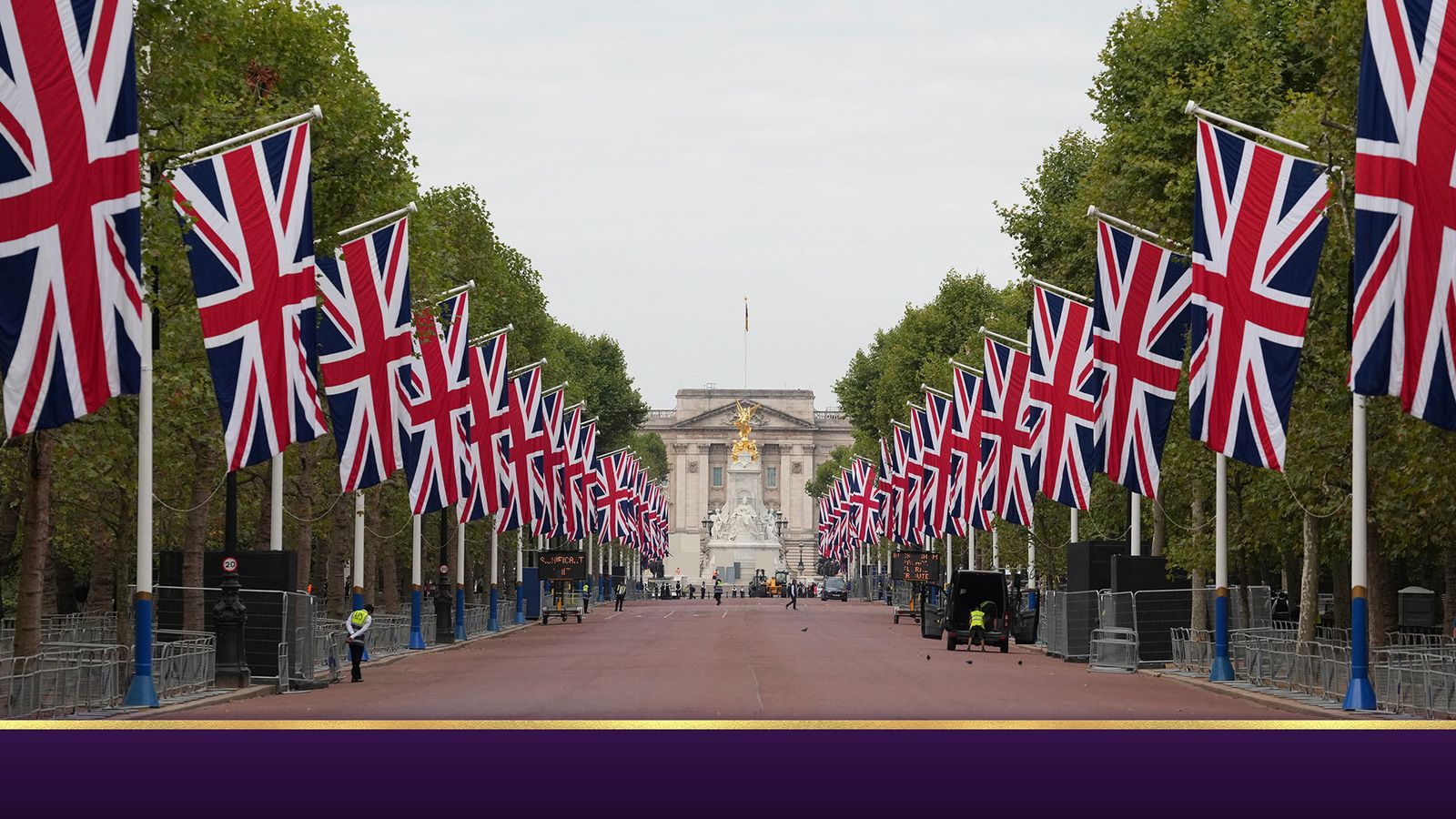 Thousands of mourners are expected to line the streets between Buckingham Palace and Westminster Hall on Wednesday to see the Queen’s coffin moved in preparation for lying in state.

The journey is about 1,800m long – just over a mile – and takes in two of London’s most famous thoroughfares, the Mall and Whitehall.

Here’s our guide to the route.

The Queen’s coffin will be taken from Buckingham Palace’s Bow Room and placed on a gun carriage of The King’s Troop Royal Horse Artillery.

The procession from the palace is scheduled to start at 2.22pm.

The King and his siblings will walk behind the carriage, as will Princes William and Harry.

Camilla the Queen Consort, Kate the Princess of Wales, the Duchess of Sussex, and the Countess of Wessex will travel by car.

Other royals in the procession include Anne’s son Peter Phillips, the Queen’s eldest grandchild.

The Imperial State Crown and a wreath of flowers will be placed on the coffin.

A senior palace official said the silent procession will be “relatively small and personal”.

To the sound of minute guns, the carriage will carry the Queen along the Mall, the grand avenue in front of her home since 1952, for the last time.

It was here, in the summer, that crowds had cheered the monarch as she appeared on the palace balcony during her jubilee celebrations.

At about 900m, this is the longest part of the route.

Read more: Route revealed for queue to see the Queen lying in state

With Big Ben tolling every minute, the procession will cross the great ceremonial parade ground, famous as the site of Trooping the Colour.

The pomp and pageantry of that event, with soldiers marching in their red tunics and bearskin hats, has marked the official birthday of the sovereign for over 260 years.

The Queen used to attend on horseback herself, but in recent years travelled by carriage.

Going through Horse Guard Arch and turning right onto Whitehall, the carriage will pass some of the great offices of government, including Downing Street, as it travels about 430m to Parliament Square.

It will also pass the Cenotaph, the monument to the nation’s war dead, where for more than 60 years the Queen would lay a wreath on Remembrance Sunday.

As Whitehall becomes Parliament Street, the famous view onto the Houses of Parliament opens up, with the medieval St Margaret’s Church on the right and the gold-coloured Victoria Tower on the left.

The newly renovated Big Ben (whose official name is the Elizabeth Tower) looms large as the carriage passes over the junction at Parliament Square, and finally turns left to enter New Palace Yard at 3pm.

The Queen’s coffin will then be taken into Westminster Hall, the oldest building in Parliament, as the King and other royals follow behind.

The Speakers of both Houses of Parliament, Black Rod and two of the Queen’s most senior advisers, will lead the procession.

Draped with the Royal Standard and with the Orb and Sceptre on top, the coffin will be placed on a raised platform – the catafalque.

Read more on the Queen:
In pictures: The Queen’s journey back to Buckingham Palace
Which shops will be open and which will be closed on the day of the Queen’s funeral?

The Archbishop of Canterbury will conduct a service of about 20 minutes, assisted by the Dean of Westminster.

Members of the Sovereign’s Bodyguard, the Household Division and Yeoman Warders of the Tower of London will guard the Queen as the lying in state begins.

It starts at 5pm on Wednesday and lasts until 6.30am on Monday.

Hundreds of thousands of people are expected to file past the coffin 24 hours a day before next week’s state funeral at nearby Westminster Abbey.