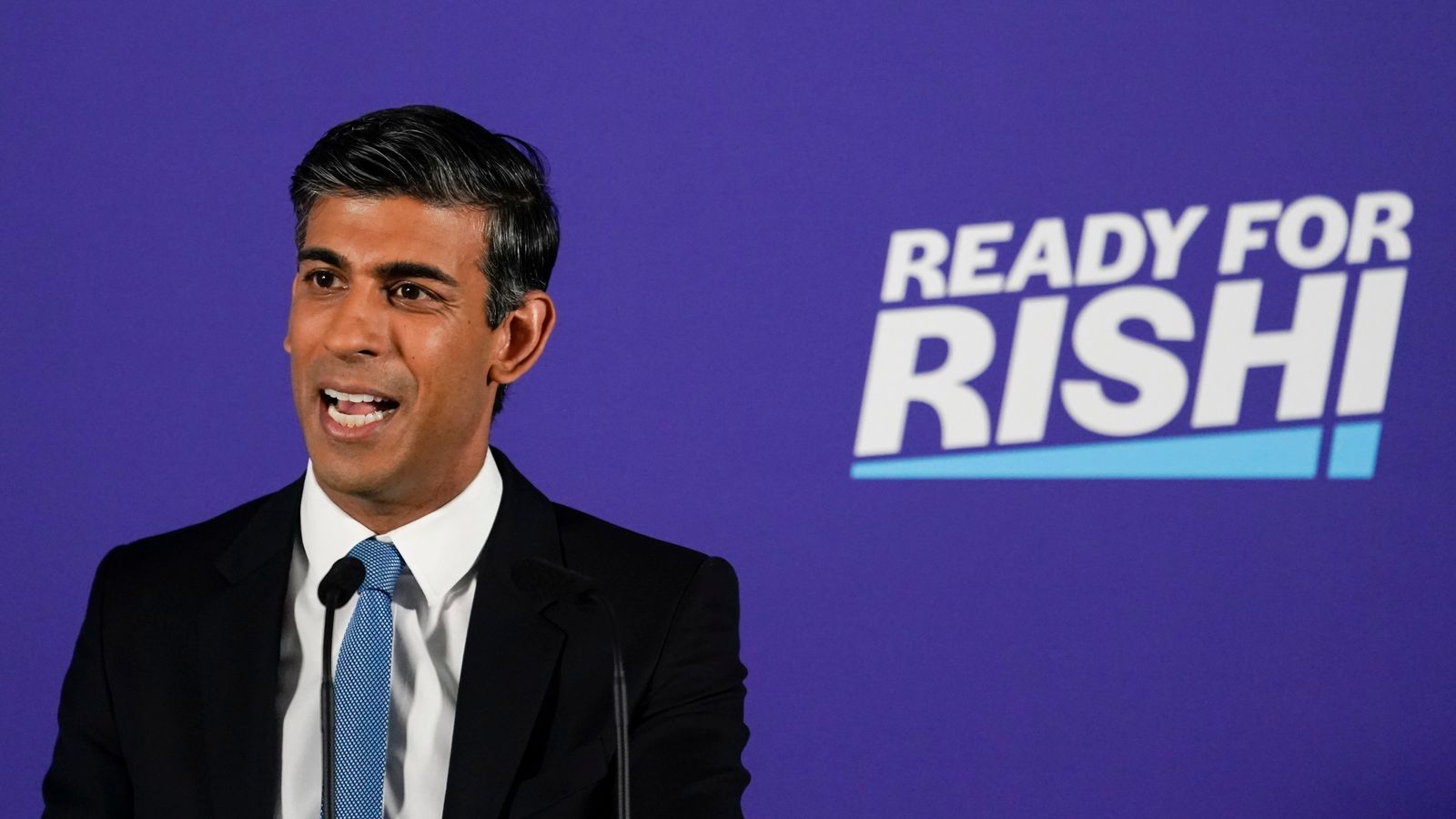 Rishi Sunak has become the first to receive 100 public endorsements from Tory MPs – enough to meet the threshold for nominations in the leadership race.

The news came just before a source close to Boris Johnson claimed he had also reached the threshold, although this has yet to be verified.

The winner of the contest will replace Liz Truss as Britain’s prime minister and become the country’s third leader this year.

Party rules for the leadership contest mean all hopefuls need the backing of at least 100 Tory MPs by Monday afternoon to stay in the race.

This means the maximum number of people able to stand is three.

If three candidates get 100 backers, there will be a vote by MPs, with the winning two put forward to the party membership.

‘Difficult to see’ how Johnson could be PM – politics latest

If members are required to vote on the top two contenders, the new leader will be chosen by Friday 28 October.

Should Tory MPs coalesce around one candidate, however, the contest will be over on Monday.

The second leadership contest in three months got underway on Thursday after the extraordinary resignation of Ms Truss, who was forced from office 44 days into her tenure after a seismic few weeks in Westminster in which her tax-slashing mini-budget crashed and burned.

Lord Frost, a former Brexit minister and close ally of Boris Johnson, called on his party colleagues to back Mr Sunak.

The Tory peer tweeted: “Boris Johnson will always be a hero for delivering Brexit.

“But we must move on. It is simply not right to risk repeating the chaos and confusion of the last year.

“The Tory Party must get behind a capable leader who can deliver a Conservative programme. That is Rishi Sunak.

“As I wrote in July: ‘(Rishi) would be a very able prime minister. He understands the issues, can work the machine, and is a decent guy to boot. He would mark a big change in ‘feel’ from the Boris years.’

“That’s what we now need. Let’s get behind Rishi.”

Mr Sunak won the backing of Sajid Javid, his predecessor as chancellor who backed Ms Truss in the last race and Mr Johnson in 2019.

Mr Javid said Mr Sunak has the “values our party needs” to help them “move on from the mistakes of the past”.

He also had the backing of former minister Johnny Mercer, who argued he could not put himself or his constituents through another Johnson administration after the “terrible” lows last time.

“I love Boris to bits, and he’s got amazing qualities for this country, but it is now time for serious, competent, straight-forward and values-based governance.”