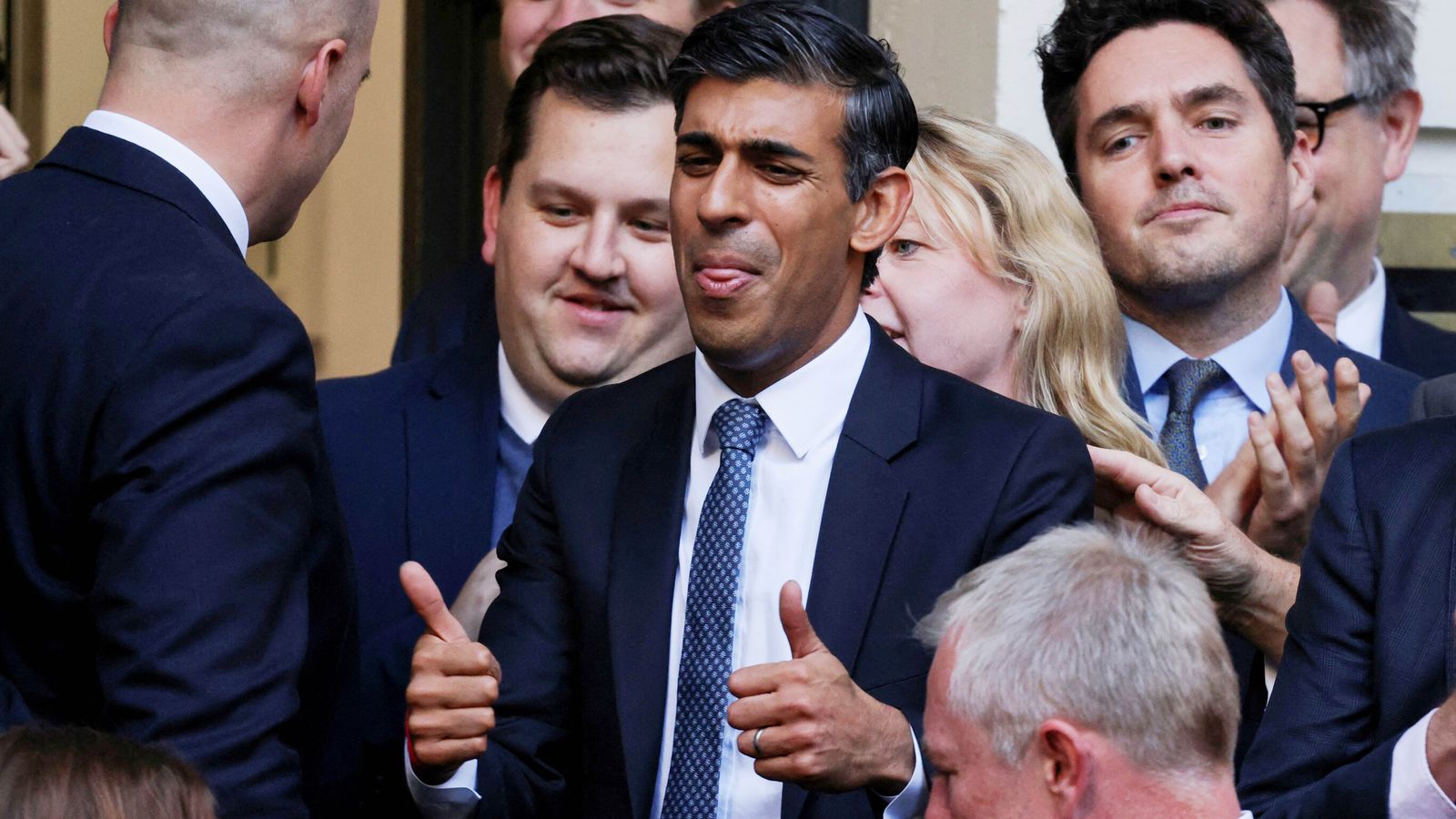 Rishi Sunak has said the UK faces a “profound economic challenge” in his first comments since being announced as the next prime minister.

He said he is “humbled and honoured” to become the next prime minister, describing it as the “greatest privilege in my life”.

Mr Sunak also paid tribute to Liz Truss after he was selected by Conservative MPs to succeed her as Tory leader.

The former chancellor’s comeback represents a number of symbolic milestones: He will be the UK’s first Hindu prime minister, the first of Asian heritage, and the youngest for more than 200 years at the age of 42.

Ms Mordaunt bowed out of the leadership race at the eleventh hour on Monday after failing to get the 100 nominations from Tory MPs required by the 2pm deadline.

Sources in the Mordaunt camp said she got 90 nominations, though the number of those who publicly announced their backing of her fell far short of this.

Ms Mordaunt conceded seconds before the results were due to be announced.

“These are unprecedented times. Despite the compressed timetable for the leadership contest it is clear that colleagues feel we need certainty,” she said in a tweet.

“They have taken this decision in good faith for the sake of the country.”

She added: “We all owe it to the country to each other and to Rishi to unite and work together for the good of the nation.

“There is much work to be done”.

Her decision came after Boris Johnson also withdrew from the contest on Sunday evening, despite claiming he had the backing of at least the 100 MPs required to make it on to the ballot.

It means Mr Sunak will enter No 10 unopposed and avoid an online ballot of the Conservative members that rejected him for Ms Truss last month.

Announcing the results of the leadership race, Sir Graham Brady, chairman of the powerful 1922 committee, said the Conservative Party only received one “valid” nomination to be the leader, and that was Mr Sunak.

Several senior Tories have congratulated the Richmond MP and called on the party to unite around him, but opposition parties have reiterated their calls for an immediate general election.

‘No mandate to lead’

“We need a general election so the public get a say on the future of Britain – and the chance for a fresh start with Labour.”

Mr Sunak will not officially become prime minister until Ms Truss formally tenders her resignation with King Charles, when he will be invited to form a government.

He hit the ground running by addressing Conservative MPs behind closed doors in the House of Commons half an hour after his victory was announced.

Shortly afterwards, he arrived at Conservative Campaign Headquarters in Westminster to cheers from Tory MPs gathered on the steps of the building, waiting to greet him.

Mr Sunak now has the daunting task of leading the nation through an economic crisis exacerbated by the chaotic legacy of Ms Truss, who was ousted after only six weeks in office.

The former foreign secretary won the last leadership race on a mandate to slash taxes to spark economic growth, but she was forced to row back on almost all of her economic policies after her mini-budget sent the markets into financial turmoil and the pound crashing.

He also has to appoint a new cabinet on the backdrop of widening divisions within the Conservative Party as he attempts to pull the economy back together and boost support for the party.

Army standing by to fill roles during NHS strike – as more workers walk off their jobs
Messi marks 1,000th game with a goal as Argentina beat Australia in World Cup last-16
Rishi Sunak says ‘racism must be confronted’ after Buckingham Palace row
What’s the significance of China’s anti-lockdown protests?
By-election wasn’t just a bad result for the Tories – it was a disaster